Plums. I have a lot of them. My next door neighbour kindly deposits plastic bags full of them over the shelves, my in-laws have tens of kilos going spare and there is only so much plum jam or frozen stewed plums you can make.

Then inspiration hit me – dry them. I’m going to need to make Christmas cake and pudding for the feast, and for those, dried fruit is needed so I thought I could make my own.

I cut the plums in half, stoned them and then popped the back of them to increase the surface area. To do this you simply push the skin side of the plum half upwards so it turns inside out. I placed them skin side down on my dehydrator’s trays and switched it on to 50C, and left them for 24 hours. 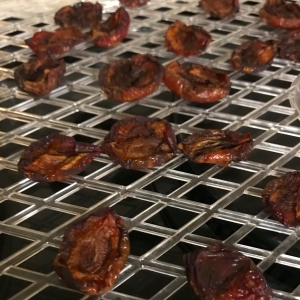 The results were a bit mixed. The smaller plums had really dried, becoming leathery with crisper edges, whereas the fatter, riper plums still had a chewy texture. The problem was that all of them were incredibly sour. These things were supposed to be prunes – intensely sweet not sour. So my thought is this, soak them in booze and sugar before making them into cake or pudding and hopefully that should sort it out.

What is Forage a Feast

I’m trying to forage an entire Christmas dinner, presents, decorations and drinks and then hold a feast for ten of my friends. Thing is, I haven’t a clue how to do it.